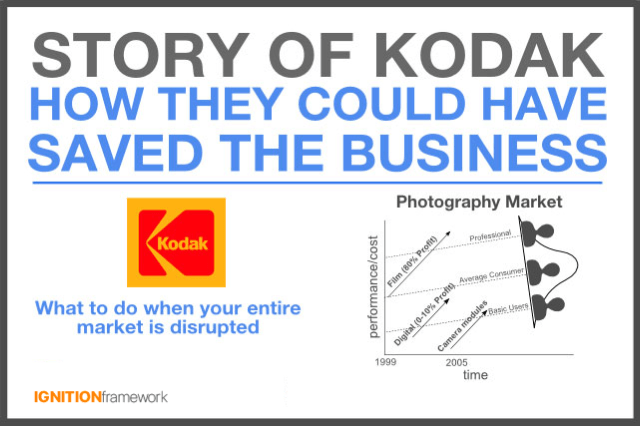 “The reason why people give up so fast is because they tend to look at how far they still have to go, instead of how far they have gotten.”

Data can help you identify and thwart potential threats

Blockbuster Video and Sears might have avoided demise had they paid attention to market data predicting changing consumer behaviors that were no longer aligned with their business models.

Similarly, Blackberry and Kodak could have remained the dominant leaders of their respective industries if they had been attentive to changes in product preferences by their target markets.

These four companies and many more like them had an opportunity to avoid catastrophe. The upheaval in their markets did not happen overnight. Warning signs were buried in various metrics well before their fates were irreversible.

But, the decision-makers in these organizations would have been collecting the right data to better understand what was happening and to have clarity of action to respond in a manner that would have protected their market position… or at least greatly reduced the blow.

Might your business be at risk of negative impact due to market changes? Do you know for sure one way or the other? Have you assessed what threats might harm your organization, made sure you have data collection methods in place to monitor those threats, and have action plans for what to do should a threat gain traction?

As you take these actions, it is imperative that you and your team avoid the artificial filtering of risks based on biased preference. The executives at Blackberry predetermined for themselves that a hardware-based keyboard on phones would remain preferred because of the tactile feedback of pressing keys. They were wrong.

Similarly, Kodak’s leadership prejudged digital photography as being of such a lower quality than physical film that there was no way professional photographers would switch. Their business model bias got in the way of their surveying the market for the unthinkable but possible. They failed to account for the rapid improvements to occur in the quality of digital photos. But, more than that, they took the allegiance of professional photographers for granted thinking they knew them well enough already. That led to them not knowing that photographers loved the lower cost of taking many more photos digitally and being able to more rapidly provide customers their photos.

Finally, we offer our assistance by conducting a threat detection data audit if you lack the resources of personnel, time, and/or attention to creating the methods of monitoring predictive threat data.